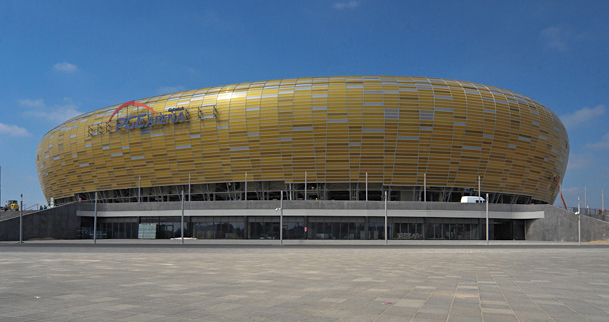 The Stadion Energa Gdańsk (Polish pronunciation: [ˈstadjɔn ɛˈnɛrɡa ˈɡdaj̃sk]), previously called the Baltic Arena and PGE Arena Gdańsk (IPA: [pɛɡʲɛˈɛ aˈrɛna ˈɡdaj̃sk]) is a football stadium in Gdańsk, Poland. It is used mostly for football matches and is the home stadium of Lechia Gdańsk currently playing in the Ekstraklasa. The Stadium is located on ul. Pokoleń Lechii Gdańsk ("Generations of Lechia Gdańsk street") in the northern part of the city (Letnica district). The capacity of the stands is 41,620 spectators, all seated and roofed. The stadium is the second largest arena in Ekstraklasa and the third largest in the country (after National Stadium and Silesia Stadium). (Wikipedia)