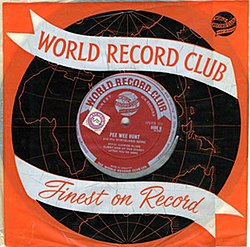 The World Record Club Ltd. was the name of a company in the United Kingdom which issued long-playing records and reel-to-reel tapes, mainly of classical music and jazz, through a membership mail-order system during the 1950s and 1960s. In addition to titles imported from recording companies like Everest Records and Westminster Records, which it obtained on franchise, it made a series of recordings of international artists using its own engineers. Although often of great musical interest and very acceptable technical quality, these recordings do not appear in shop catalogues of the time as they were not available new through record shops. The label was taken over by EMI in 1965 but continued to be used as a sub-label for mail order, covering a wide range of musical genres, and distributing in South Africa, Australia and New Zealand. (Rondo DB)